Ignatius Park College bears witness to the dedication and hard work of the Christian Brothers, who, in the spirit of their founder, have lived and worked in the College community for 100 years. While Ignatius Park College opened on its current site in 1969, it continued the proud traditions of Our Lady's Mount, the first of a number of schools opened by the Christian Brothers in the Townsville region.

If Townsville had to wait until after the establishment of the school in Charters Towers, it also had to wait for the settlement of a wrangle over staffing the cathedral school in Sydney where church authorities were not all that interested in north Queensland. 'After all, what is Townsville but a stewing pan.' Fr. Walsh's dream of a Christian Brothers' school in Townsville became a reality after his death and partly because of his bequest of £2,000. Though Our Lady's Mount was set up in an old museum extended for school purposes, Bishop Duhig waxed lyrical about its being 'hard to find in the Commonwealth a school better appointed in all respects than this.' A pupil of the school, unimpressed by the same pile of architecture, later recalled 'I don't know how the crowd survived the afternoon's ordeal (on opening day), for that middle room was always warm and badly ventilated.'

In Townsville, very few Catholic boys attended the Grammar school there and it was not long before a spirit of co-operation developed between it and Our Lady's Mount. Mr. D. Whelan, resident master at Townsville Grammar, assisted the brothers by teaching a special senior class in Latin, mathematics and ancient history at the brothers' residence from four o'clock till five forty-five each weekday, and from nine to half past twelve on Saturdays. His efforts and those of the brothers brought a higher than average percentage of successes in public examinations. The popularity of the brothers' work in the town prompted Fr. J. Rowan to make a formal request for brothers to establish a school at West End in the early 1920s, and though it looked for a time as though the move might succeed, nothing came of it.

Our Lady's Mount may have had one of the best views in Townsville, but its situation on Stanton Hill meant a daily climb for pupils and little room for expansion, though necessary additional class and science rooms were erected as needs arose. Part of the problem was alleviated in 1952 with the opening of St. John Fisher's, Currajong, which relieved Our Lady's Mount of some of the primary boys 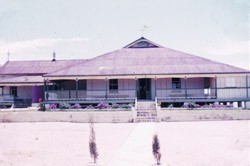 A pivotal year in the history of the College occurred in 1961 on the fiftieth anniversary of the educational facility in Townsville. Mr Joe Griffin, then president of the Old Boys Association, announced the proposal to purchase land where a new College would be established. For several years Saint John Fishers, established in 1952, had relieved the strain of enrolment numbers. Maintenance of the buildings was becoming finically unviable and space for additional facilities was strictly limited. The suburbs of Townsville were rapidly expanding to the west and the centrally located College was becoming increasingly difficult for student access and transportation. 'The Mount' was coming to its end. Though Our Lady's Mount was closed at the end of 1968, Ignatius Park continued the spirit of the original school, meeting new educational needs as they arose.